The relationship between abstraction and figuration has been a continuous focus throughout Copeland’s career. He has stated, ‘I’m more interested in using the language of painting and working with the edge of abstraction, working with the push and pull of paint, image, readability and texture.’

The artist’s figures are often drawn from found images, which he distorts in thick layers of paint. In building a thick impasto upon his canvas he imbues his expressionistic paintings with a darker tone that references libidinous human drives which are concealed within everyday experiences. Often working with established art historical tropes, such as the nude and the table and the skull, Copeland aims to explore the complexities of image-making and representation. Process driven, Copeland creates his works around a given idea in order to build compositions that explore the balance between everyday realities and the violence and drives that underlay human existence. His work has moved increasingly towards abstraction, in which his figures blend more and more into the background as he works with numerous colours which combine together, never allowing a single colour to dominate the canvas.

Born in California in 1976, John Copeland studied at the California College of Arts and Crafts, where he gained a BFA in 1998. Copeland’s work has been exhibited internationally in Copenhagen, Bologna, Zurich, New York, Leipzig and most recently at the Newport Street Gallery in London. 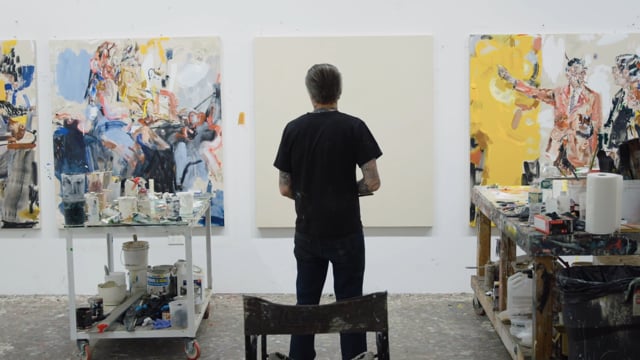