When First is Last and Last is First, 1999. Basil Beattie

Huxley-Parlour Gallery are pleased to present an exhibition of works by acclaimed Royal Academician, Basil Beattie. The exhibition includes six large-scale paintings, that testify to Beattie’s skill as a mark-maker, and to his painterly ambition and expressive energy. Undoubtedly one of the most significant and singular abstract artists to emerge in post-war Britain, Beattie is known for his monumental compositions, the physicality of his paint and gestural use of symbols and signs. Influenced by Abstract Expressionism, Beattie brought the grandeur and scale of the New York School to London. When First is Last and Last is First, 1999. Basil Beattie

Dating from 1989 through to 2004, the works chart the development of Beattie’s output throughout the 1990s. A defining era for the artist, this decade saw Beattie abandon a purely formal approach, and begin developing a new form of allusive abstraction, based on pictorial symbolism, distinguishing himself from his contemporaries. This decade saw Beattie develop themes that have come to define his artistic output: of journeying through space, the passing of time and progress.

Architectural motifs including ladders, tunnels, bridges and doorways thread themselves through Beattie’s later oeuvre. His interest in these signs lies with their multiplicity of meaning: that the words refer not only to architectural structures, but can also be used metaphorically to describe psychological and emotional states of being.

The exhibition runs in conjunction with Basil Beattie: Cause & Effect, on view at Hales Gallery, London (24th January – 14th March 2020), which charts the development of Beattie’s work throughout the early 1980s. 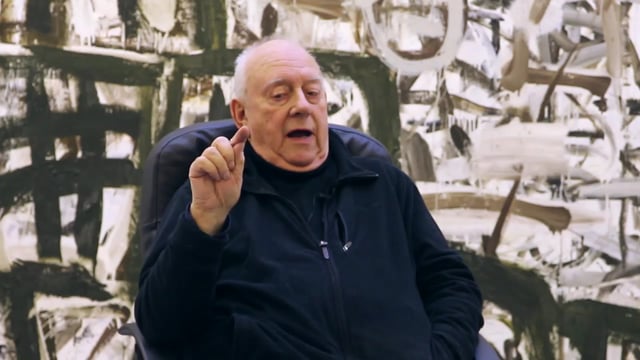 Basil Beattie’s early work continued the legacy of Abstract Expressionism in Britain. His work in the 1960s and early 1970s was heavily influenced by The New American Painting, an exhibition held at the Tate in 1959 – displaying an enthusiasm for work expansive in both scale and subjectivity. By the mid-1990s Beattie had abandoned a purely formal approach and begun to develop a new form of allusive abstraction.

Beattie’s work is characterised by the inclusion of recurrent motifs – some recognisable as ladders, doors and stairs, others far more elusive and abstract. These strongly defined motifs lend psychological and physical complexity to his work through their evocations of space and time. Beattie’s works on paper have formed a significant part of his practice where a deployment of earthy tones and assertive, gestural forms remain equally compelling.

Basil Beattie was born in 1935 in West Hartlepool. He attended the West Hartlepool College of Art from 1950 until 1955, before continuing his education at the Royal Academy schools between 1957 and 1961. Beattie became a Royal Academician in 2006 and was later elected to become a Senior Royal Academician in 2010. He has twice been shortlisted for the Jerwood Prize, in 1998 and 2001, and once for the Charles Wollaston Award in 1990. He has had many solo and group exhibitions, including solo exhibitions at Tate Britain, London and the Jerwood Gallery, Hastings. His work can be found in numerous private and public collections including those of Arts Council England, the Contemporary Art Society, the Royal Academy Collection and the Tate.