Below the Clouds with Water Lillies (2021)

Huxley-Parlour are pleased to announce a solo presentation of new works by Yulia Iosilzon. The new body of work explores notions of hedonism, escapism and fantasy through the artist’s signature use of bold colours, and free-flowing calligraphic lines, laced with layers of symbolism and repeated motifs.

Stating that she mixes references ‘like a salad’, Iosilzon is interested in repetition and duality of meaning. In developing a symbolic language – partly self-invented, partly plucked, magpie-like, from popular culture, folklore and religion – Iosilzon allows for multiple levels of meaning to emerge in her practice. Subverting binaries, her compositions are simultaneously direct and complex, otherworldly and familiar.

Iosilzon works directly with a mix of oil and silicone on stretched translucent silk. Building up layers of paint, and of meaning, the artist links her choice of medium to a ‘mosquito net’, offering transparency but also impenetrability. Iosilzon’s fractured compositions and disrupted narratives explore ideas of allusion, ephemerality and the consumption of images. 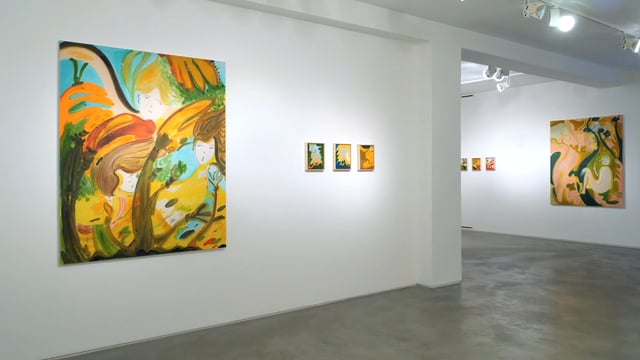 Below the Clouds with Water Lillies

Bird’s-eye View Reminded Me of a Melted Ice Cream

The Elephant in the Room

Ongoing Swim in the Flee Pond

In developing a symbolic language – partly self-invented, partly plucked, magpie-like, from popular culture, folklore and religion – Iosilzon allows for multiple levels of meaning to emerge in her practice. 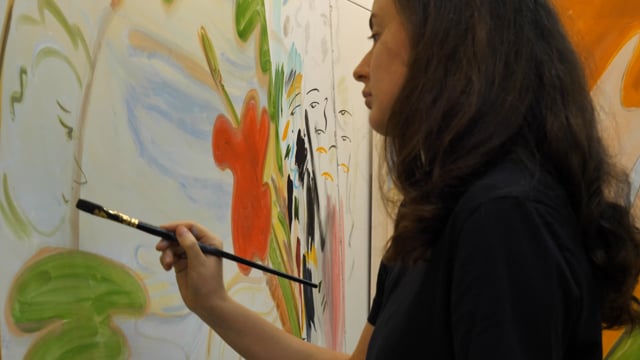 Yulia Iosilzon’s paintings are laden with vibrant washes of colour incorporated over transparent silks and cloths. Grounding her works within narrative and anecdote, the artist cites children’s illustration and theatre as sources of inspiration, encouraging her lyrical works to be understood as scenes within a comic strip. Iosilzon often repeats symbols and motifs throughout her paintings, sculptures, and installations, building up an iconographic arsenal which she uses to comment on personal, social and political issues.

Iosilzon was born in Moscow, Russia in 1992. She completed a Foundation in Art and Design at Camberwell College of Art, before gaining a Fine Art BA from the Slade School of Fine Art, and later a Fine Art MA from the Royal College of Art. Iosilzon has exhibited internationally, including solo shows in New York and in Moscow. She received the prestigious Bloomberg New Contemporaries award in 2019, and the Audrey Wykeham Prize in 2016.

She lives and works in London.